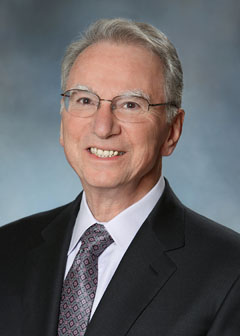 Irwin Mark Jacobs is founding chairman and CEO Emeritus of Qualcomm, a company he co-founded in 1985. As CEO through 2005 and chairman through 2009, he led the growth from startup to Fortune 500 company, now with over 22,000 employees worldwide. Qualcomm pioneered the development and commercialization of CDMA wireless technology, the basis for all third-generation cellular networks which now provide voice and broadband Internet access for over 1.6 billion customers. Qualcomm is the world's largest semiconductor supplier for wireless products and a leader in introducing fourth-generation technology. For 14 consecutive years, Qualcomm has been named to Fortune's list of "The 100 Best Companies To Work For."

Dr. Jacobs previously served as co-founder, CEO, and chairman of LINKABIT Corp., leading the development of Very Small Aperture Earth Terminals (VSATs) and the VideoCipherÂ® satellite-to-home TV system. LINKABIT merged with M/A-COM in August 1980, and Irwin served as executive vice president and a member of the board of directors until his resignation in April 1985. Over 100 San Diego communications companies trace their roots to LINKABIT.

From 1959 to 1966, Irwin was an assistant, then associate professor, of Electrical Engineering at the Massachusetts Institute of Technology (MIT). From 1966 to 1972, he served as professor of Computer Science and Engineering at the University of California, San Diego (UCSD). While at MIT, Irwin co-authored with Jack Wozencraft a textbook in digital communications, Principles of Communication Engineering. First published in 1965, the book remains in use today.

Irwin was named chair of the board of trustees of the Salk Institute in November 2006 and chair of the National Academy of Engineering in July 2008. He serves on the UCSD Foundation board of trustees in addition to the UC San Diego Health System advisory board and is past chairman of the University of California President's Engineering Advisory Council. In June 2011, he was appointed by the Secretary of Education to serve on the board of the National Center for Research in Advanced Information and Digital Technologies (aka, Digital Promise). Additionally, Irwin is a board member of Building Engineering & Science Talent (BEST).

Irwin is the recipient of numerous industry, education, and business awards, including:

Irwin and his wife, Joan, have been cited by BusinessWeek and the Chronicle of Philanthropy as among the "50 Most-Generous Philanthropists" in the United States.

To contact Irwin Mark Jacobs, fill out the form below.