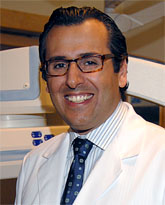 Dr. Nassir F. Marrouche has dedicated his career to developing innovative research and clinical practices to advance patient care, diagnosis, and treatment of heart arrhythmias. In 2006, he created the Comprehensive Arrhythmia Research and Management Center (CARMA), bringing together a cross-departmental team of physicians, scientists, researchers, and MRI and imaging specialists dedicated to working collaboratively to answer the questions: What if we treated patients proactively instead of reactively? Moreover, what if we could predict and prevent a stroke in a patient before it happens? Under his guidance, the CARMA Center developed the Utah Classification System, enabling electrophysiologists and cardiologists to deliver individualized care to arrhythmia patients.

Following his internships, Nassir received a fellowship in Internal Medicine and Cardiology at the University of Wurzburg. The Cleveland Foundation then offered him a fellowship in the Section of Pacing and Electrophysiology in the Department of Cardiovascular Medicine. In addition to presenting his work across the globe, Nassir is the director of the Western Atrial Fibrillation Symposium.

After spending time at the Cleveland Clinic, Nassir accepted a faculty position at the University of Utah. A native of Beirut, Lebanon, he now makes his home in the mountains of Park City, Utah, with his wife, Robin, and baby daughter.

To contact Nassir F. Marrouche, fill out the form below.