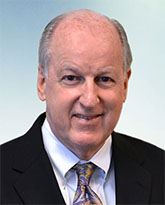 From 2006 to the present, William has been president and CEO of Science Foundation Arizona, where he is responsible for initiating a new public-private $235MM partnership to help the state of Arizona transform its focus on research and education.

Previously, as director general of the Science Foundation Ireland (2001-2006), Bill was responsible for the overall leadership of this new national science foundation and management of its â¬635MM grants program. The SFI was founded in 2000 by the Irish government to build high-tech research programs with national economic impact, to support outstanding Irish scientists, and to recruit distinguished scientists from around the world to Ireland's universities and institutes of technology. With SFI, Bill built partnerships with numerous Irish government agencies to create dynamic academic-industry research centers, recruited multinational corporate investment in these centers, and initiated the formation of effective national policies on technology transfer and intellectual property.

From 2000 to 2001, Bill was vice president for Research and a professor of Chemistry at the University of South Carolina, where he was responsible for leading research activities totaling $125MM annually throughout the eight campuses and diverse interdisciplinary centers of the state's most comprehensive public university. At USC, he initiated a focus on interdisciplinary work by young faculty from the arts, humanities, and social sciences and established processes enabling students to earn support from incubator. Bill also served on the Governor's Task Force, focused on building a more diverse, knowledge-based economy.

From 1996 to 2000, Bill was assistant director of the Columbia University Earth Institute and president of the Biosphere 2 Center, the western campus of Columbia which focused on earth systems science and climate model testing. There he developed an undergraduate semester system for students from approximately 30 colleges/universities and led construction of a new campus complex.

As assistant director for Mathematical and Physical Sciences at NSF (1992-1996), Bill was responsible for creating a major focus on interdisciplinary research by establishing the Office of Multidisciplinary Activities, where he successfully introduced new materials-focused group grants and guided the successful establishment of a new magnet lab, the Gemini telescopes, and the LIGO project.

To contact William Harris, fill out the form below.