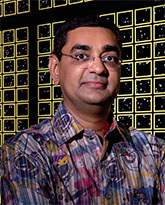 Dharmendra has also made significant contributions to IBM businesses via innovations in caching mechanisms for storage controllers, clustering algorithms for services, and coding theory for disk drives. His work has been featured in the Economist, the New York Times, the Wall Street Journal, the BBC, Discover, the MIT Technology Report, the Associated Press, Popular Mechanics, Science, Communications of the ACM, Forbes, Fortune, and IEEE Spectrum.

The author of over 70 papers and inventor of more than 100 patents, Dharmendra has won ACM's Gordon Bell Prize, the USENIX/FAST Test of Time award, Best Paper awards at ASYNC and IDEMI, and first place in the Science / NSF International Science & Engineering Visualization Challenge. He is a Fellow of IEEE and the World Technology Network.

In 2013 and 2014, Dharmendra was named as Best of IBM. On its 40th anniversary, EE Times named him among 10 Electronics Visionaries to Watch.

To contact Dharmendra S. Modha, fill out the form below.