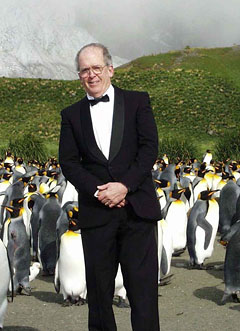 Roger Payne is best known for his discovery (with Scott McVay) that humpback whales sing songs and for his calculation showing that the sounds of fin and blue whales can be heard across oceans (since confirmed). His BA degree is from Harvard, and his Ph.D. from Cornell. His earliest work was on directional hearing in bats and his Ph.D. dissertation on how owls locate mice in total darkness based solely on hearing them move. From 1967 to 1982, he had a dual appointment at the Wildlife Conservation Society and Rockefeller University. He remained at Rockefeller University until 1985, before leaving to devote full time to Ocean Alliance, the institute he founded and of which he now serves as president.

Since 1967, Roger has studied the behavior of whales, led over 100 expeditions to all oceans, and studied every species of baleen whale in the wild. His institute has recently completed the Voyage of the Odyssey, a five-year, around-the-world research expedition to measure pollution levels in ocean life. The voyage collected 955 skin samples from sperm whales (obtained by biopsy dart and harmless to the whale), which are currently being analyzed for a suite of synthetic, endocrine-disrupting chemicals (EDCs), heavy metals, and brominated fire retardants. When complete, the resulting data will provide the first worldwide bioassay of the levels of these contaminants in the oceans.

Roger has pioneered many of the benign research techniques now used in more than 60 countries to study free-swimming whales. He has participated in numerous international meetings regarding conserving whales and trained many of the current leaders in whale research, both in America and abroad. Besides founding the Voyage of the Odyssey, he is the founder of long-term research projects on the songs of humpback whales and on the behavior of over 3,000 individually known Argentine right whales - the longest such continuous study of any baleen whale.

Roger publishes technical articles and writes for general audiences. One of his articles in National Geographic magazine contained a phonograph record of whale sounds for which 10.5 million copies were printed (which remains, to this day, the largest single print order in the history of the recording industry). His publications include the book Among Whales (1995) and three recordings: Songs of the Humpback Whale (1970), Deep Voices (1975), and Whales Alive (1989 - works composed by whales but arranged and played by humans). He has appeared in over 40 documentary films for television, a few of which he has presented and/or written. He co-wrote and co-directed the IMAX film Whales. An award-winning film about his work - A Life Among Whales - is currently being screened worldwide.

Roger's honors and awards include a knighthood in the Netherlands, a MacArthur Fellowship, the similar Lyndhurst Prize Fellowship, the Albert Schweitzer medal of the Animal Welfare Institute (shared with his first wife, Katy Payne), the Joseph Wood Krutch medal of the Humane Society of the U.S., the James Duggan Memorial Award of the American Littoral Society, the University of Massachusetts Writing and Society Award, a United Nations (UNEP) Global 500 award, the Emmy for Best Interview (for his interview with Charlie Rose, in One-On-One With Charlie Rose). He was a finalist in 2006 and 2008 for the Indianapolis Prize and the 2007 winner of Oxford University's Dawkins Prize.

To contact Roger Payne, fill out the form below.