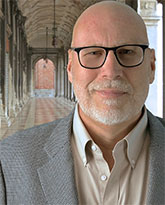 Gregory Ness is the founder of Actium Bay Group, a Silicon Valley-based boutique marketing agency. As a Future in Review (FiRe) conference panelist, he was among the first to point out network and security issues with virtualized IT infrastructures and then emerging cloud operating models, which led to the formation of the Infrastructure 2.0 Working Group with FiRe advisor Dan Lynch and a host of leaders in the networking industry.

Greg's Archimedius blog was one of the world's most influential cloud computing blogs. He has published two science fiction novels (Antioch and Alexandria) and is working on his third, scheduled to be published in 2019.

On a personal note, Greg enjoys reading and writing, travel, and spending as much time as possible with his family.

To contact Greg Ness, fill out the form below.