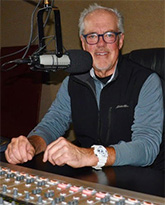 John Wells produces and hosts public-affairs programs for KPCW, the NPR affiliate in Park City, Utah. Award-winning âCool Science Radioâ was launched in 2013. John wanted to shine a bright light on the scientific process and the accomplishments of the women and men in STEM-related fields. John also moderates panels and interviews filmmakers for the Park City Film Series when science and/or technology-based films are screened. In 2014, he launched, produced, and hosted âThe Morning Mixâ for KPCW. TMM is an entertainment show with live in-studio music of local and national touring acts. In September of 2019, John stepped down from âThe Morning Mixâ to focus on âCool Science Radioâ and other interests.

Before Johnâs second act in radio, he had over 30 years of experience in executive management for technology companies whose principal businesses were networking, high-performance computing, and network-attached storage. He has held senior management positions in field sales and operations for Data General, Chipcom Corp., MIPS Computer Systems, and Netapp. The last three companies were startups where John was one of the first employees. All three companies had successful public offerings.

John was chairman of the board for the Lowell Transitional Living Center, which provided a safe 90-bed shelter for homeless men and women in Lowell, Massachusetts, as they moved toward self-sufficiency. The center provided on-site social workers, job training, detox referral, on-site GED, and 12 apartments for transitional living. Its soup kitchen served 45,000 meals a year. He was also the vice president of the board of directors for the Greater Lowell Pastoral Counseling Center. GLPC provided professional psychotherapy to patients on a sliding scale tied to their ability to pay. Nobody was ever denied psychotherapy counseling.

No news for John Wells today.

To contact John Wells, fill out the form below.