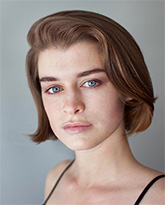 Originally trained as a photographer, Lindsay's work has been published in the New York Times, Time Out magazine, and Interview magazine, and has been auctioned at Christie's. Upon graduating from Wesleyan University in 2011, Lindsay began producing narrative films and music videos. Her personal experience with Lyme disease rerouted her toward documentary filmmaking.

No news for Lindsay Keys today.

To contact Lindsay Keys, fill out the form below.