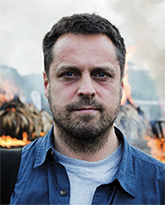 Andrea Crosta is relentless in his mission to protect wildlife through undercover investigations around the world. His organization, Earth League International (formerly Elephant Action League), currently comprises 12 international teams on three continents. His team of undercover investigators is extremely efficient and includes many operatives from China - the country where most of the illegal products are being shipped - but also former FBI and CIA operatives who have dedicated their lives to saving our planet's wildlife.

Andrea is among the main protagonists of the Netflix documentary The Ivory Game and of the NatGeo documentary Sea of Shadows (premiered at Sundance Film Festival 2019 - Audience Award), about the trafficking of totoaba and the potential extinction of the vaquita in the Sea of Cortez, Mexico.

Andrea's investigation of the syndicates behind the totoaba trade started back in 2016, and a preliminary report into the Chinese trade was released in the summer of 2017. The investigation depicted in Sea of Shadows targets Chinese traders in Mexico, and because it also involves the drug cartels, it is one of the most dangerous he has ever conducted.

Andrea is among the founding members of the Wildlife Justice Commission in the Hague, Netherlands, a member of the board of The Africa Conservancy Foundation, and the creator and project manager of WildLeaks, the world's first wildlife-crime whistleblower initiative. He is the co-author of the first investigation into ivory trafficking and terrorism - "Africa's White Gold of Jihad: al-Shabaab and Conflict Ivory" (2010-2012) - which changed forever the narrative around the issue of elephant poaching and ivory trafficking.

Sea of Shadows was selected as the FiRe 2019 Featured Film

No news for Andrea Crosta today.

To contact Andrea Crosta, fill out the form below.