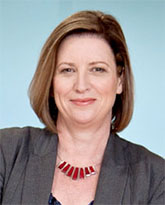 Prior to her current role, Kate was group managing director of Telstra Innovation, Products and Marketing, from March 2010. In this role, Kate oversaw product, promotion, and pricing across Telstra, including the major product units â Mobile Products, Fixed Voice and Broadband, Network Applications and Services, and Data and IP, as well as the NBN team and the Chief Technology Office. Kate oversaw the rollout of Telstra's new brand identity, was at the forefront of the turnaround in Telstra's mobile business, and led the company's transition to the NBN by creating truly differentiated products and services in a highly competitive market.

Before joining Telstra, Kate was director-general of the Department of Commerce in New South Wales. She previously held a range of senior executive roles in government departments and offices. Kate is a director of FOXTEL and Allianz Australia, and she has been a director of Sydney Water and the Rail Corp. of New South Wales. She holds a Bachelor of Arts degree and a Bachelor of Law degree from the University of Sydney.

No news for Kate McKenzie today.