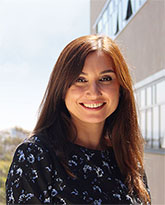 Ilkay Altintas is the chief data science officer at the San Diego Supercomputer Center (SDSC), UC San Diego, where she is also the founder and director for the Workflows for Data Science Center of Excellence. Since joining SDSC in 2001, she has worked on different aspects of dataflow-based computing and workflows as a principal investigator and in other leadership roles across a wide range of cross-disciplinary NSF, DOE, NIH, and Moore Foundation projects.

Ilkay is a co-initiator of and an active contributor to the popular open-source Kepler Scientific Workflow System and the co-author of publications related to computational data science and e-Sciences at the intersection of scientific workflows, provenance, distributed computing, bioinformatics, observatory systems, conceptual data querying, and software modeling.

Ilkay is the inaugural recipient of the SDSC Pi Person of the Year (2014) and the IEEE TCSC Award for Excellence in Scalable Computing for Early Career Researchers (2015).