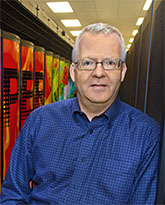 Jonathan Carter is the Computing Sciences deputy at Berkeley Lab and has held this position since 2010. Jonathan's research interests are in the evaluation of system architectures and algorithms for high-performance computing and in computational chemistry and physics simulations. Recently he has been engaged in a project to look at computer architectures beyond the end of Moore's Law and has focused on techniques to perform simulations for computational chemistry using newly developed quantum computing testbeds. He brings a unique perspective to his work, formed from using computing resources as a domain scientist, from performing performance analysis of computer architectures, and from his experience in moving large-scale computational systems from idea to reality.

Jonathan joined Computing Sciences as part of the National Energy Research Scientific Computing (NERSC) Division as a consultant in the User Services Group (USG) at the end of 1996, working with a broad range of scientists to optimize applications, transition projects from shared-memory vector systems to massively parallel systems, and provide in-depth consulting for materials scientists and chemists using NERSC. He became manager of USG at the end of 2005. During his time at NERSC, Jonathan led or played a lead role in teams that procured and deployed three of the fastest computing systems in the world.

Before coming to Berkeley Lab, Jonathan worked at the IBM Almaden Research Center with the Center for Computational Chemistry with a focus on developing fast, accurate and usable computational chemistry methods and software, and as a researcher of chemical problems of interest to IBM. During his postdoctoral work at the University of British Columbia, the group was one of the first to use density functional theory to calculate electromagnetic properties of small molecules.

Berkeley Lab's Computing Sciences is a 300-person, $180M a year research, development, and deployment organization with a mission to advance computational science throughout the Department of Energy's Office of Science research programs. The Computing Sciences organization researches, develops, and deploys new tools and technologies to meet these needs and to advance research in such areas as global climate change, new energy sources, increased energy efficiency, new materials, biology, and astrophysics.

Jonathan holds a Ph.D. and BS in Chemistry from the University of Sheffield, UK. 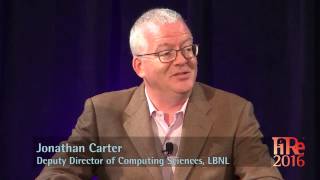 To contact Jonathan Carter, fill out the form below.