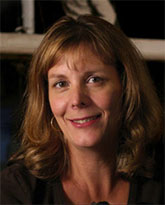 Chris Hegedus has been directing, shooting, and editing documentaries for over 40 years. She received the prestigious Directors Guild Award for Startup.com, chronicling the first internet boom and bust. Along with D.A. Pennebaker, she directed the 1992 Clinton campaign film The War Room, nominated for an Academy Award®. Other films include Elaine Stritch at Liberty (Emmy Awards), The Energy War series, Town Bloody Hall, Delorean, Moon over Broadway, Depeche Mode 101, Down from the Mountain, Only the Strong Survive, Al Franken: God Spoke, Kings of Pastry, and recently HBO's Unlocking the Cage, which was broadcast internationally and theatrically distributed in the US and Canada.

To contact Chris Hegedus, fill out the form below.