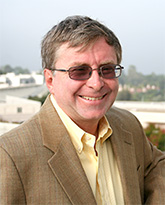 Michael L. Norman, PhD, named interim director for the San Diego Supercomputer Center (SDSC) in June 2009 and appointed to the position of director in September 2010, is a distinguished professor of Physics at the University of California-San Diego and a globally recognized astrophysicist. Michael is a pioneer in using advanced computational methods to explore the universe and its beginnings. In this capacity, he has directed the Laboratory for Computational Astrophysics - a collaborative effort between UC San Diego and SDSC resulting in the Enzo community code for astrophysics and cosmology in use worldwide.

Following his appointment as SDSC's chief scientific officer in June 2008, Michael worked to foster collaborations across the UC San Diego campus for cyberinfrastructure-oriented research, development, and education. He also serves as division director of SDSC's Cyberinfrastructure Research, Education and Development (CI-RED) and is the principal investigator for two of SDSC's leading HPC systems - Gordon and Comet - which together represent more than $42 million in National Science Foundation funding.

Michael's work has earned him numerous honors, including Germany's prestigious Alexander von Humboldt Research Prize, the IEEE Sidney Fernbach Award, and several HPCC Challenge awards. He also is a Fellow of the American Academy of Arts and Sciences and the American Physical Society. He holds an MS and PhD in Engineering and Applied Sciences from UC Davis, and in 1984 completed his postdoctoral work at the Max Planck Institute for Astrophysics in Garching, Germany.

To contact Michael Norman, fill out the form below.