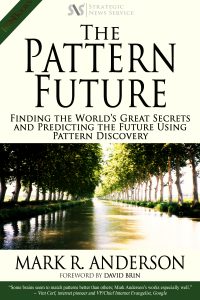 Renowned technology and economics forecaster Mark Anderson reveals hidden patterns beneath the art and science of predicting the future. Through a series of personal vignettes, Anderson exposes a complex web of causes, influences, and effects that propel today’s world, then describes strategies that he employs to lay bare new trends, to make new discoveries in a wide variety of disciplines, and to accurately foresee future events.
Editorial Reviews

“In The Pattern Future, Mark Anderson gives us a mini-biography illustrating his uncanny ability to discern patterns, whether in economics, science, education, or innovation. But Mark goes further and provides compelling examples of how the knowledge one gains from recognizing pattern shifts requires high moral courage to act on those insights, when everyone else is blind to the drastic change about to happen. The combination of understanding how to see patterns and the courage to act on their implications gives Mark his extraordinary Superpower. Quite a remarkable story!” – Larry Smarr, Founding Director, California Institute for Telecommunications and Information Technology (Calit2; a UC San Diego / UC Irvine partnership)

“Our brains appear to be massive pattern matchers according to recent neural studies. Some brains seem to match patterns better than others, and Mark Anderson’s works especially well as he explains in this wide-ranging book.” – Vint Cerf, internet pioneer and VP/Chief Internet Evangelist, Google

“Mark Anderson has earned his reputation as an extraordinarily prescient predictor of the unanticipated. His focus is on patterns as they persist through time and, critically, the subtle indications that what has been an established pattern is subject to more or less radical change. He now shares his distinctive approach to reading the future from the observable past and present.” – Bill Janeway, Senior Advisor, Warburg Pincus; and Faculty of Economics, University of Cambridge

“Mark’s reputation as a trend predictor is well-established, and with The Pattern Future, he unveils how he does it. I found the techniques and stories to be useful for those who are anticipating and planning for the future.” – Paul Daugherty, CTIO, Accenture

“In a career where I’ve been lucky enough to meet many of the best of the brightest, Mark is the smartest person in the world I’ve met who’s still alive.” – William Lohse, Venture Capitalist and Founder, Social Starts LP and Pivot Conference