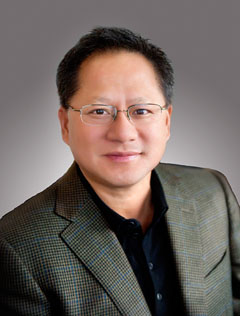 Jen-Hsun Huang co-founded NVIDIA in 1993 and has served since its inception as president, chief executive officer, and a member of the board of directors.

Under his leadership, NVIDIA invented - and led the development of - the graphics processing unit (GPU), pioneering its use in devices as varied as smartphones, PCs, cars, workstations, and supercomputers. NVIDIA GPUs deliver unmatched visual computing with breathtaking interactive graphics that delight users, and massive parallel computing power that accelerates work on the world's most challenging technical problems. NVIDIA was named "Company of the Year" in 2007 by Forbes magazine and holds more than 1,100 patents, including ones covering designs and insights fundamental to modern computing.

Jen-Hsun is a recipient of the Dr. Morris Chang Exemplary Leadership Award from the Fabless Semiconductor Association in recognition of his exceptional contributions to driving the development, innovation, growth, and long-term opportunities of the fabless semiconductor industry. He has received the Daniel J. Epstein Engineering Management Award from the University of Southern California and an honorary doctorate from Oregon State University.

Prior to founding NVIDIA, Jen-Hsun held engineering, marketing, and general management positions at LSI Logic and was a microprocessor designer at Advanced Micro Devices. He holds a BSEE degree from Oregon State University and an MSEE degree from Stanford University. 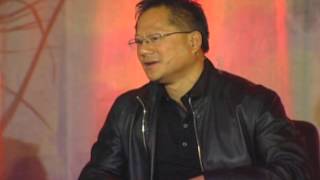