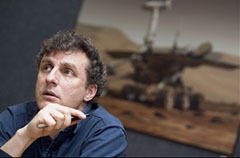 Steven W. Squyres is the Goldwin Smith Professor of Astronomy at Cornell University and the principal investigator for the science payload on the Mars Exploration Rover (MER) project. He received his Ph.D. from Cornell in 1981 and spent five years as a postdoctoral associate and research scientist at NASA's Ames Research Center before returning to Cornell as a faculty member. His main areas of scientific interest have been Mars and the moons of the outer planets. Research for which he is best known includes study of the history and distribution of water on Mars and of the possible existence and habitability of a liquid water ocean on Europa.

Steven has participated in many of NASA's planetary exploration missions, including the Voyager mission to Jupiter and Saturn, the Magellan mission to Venus, and the Near Earth Asteroid Rendezvous mission. Along with his current work on MER, he is also a co-investigator on the 2003 Mars Express, 2005 Mars Reconnaissance Orbiter, and 2009 Mars Science Laboratory missions; a member of the Gamma-Ray Spectrometer Flight Investigation Team for the Mars Odyssey mission; and a member of the imaging team for the Cassini mission to Saturn.

Searching for Life on Mars 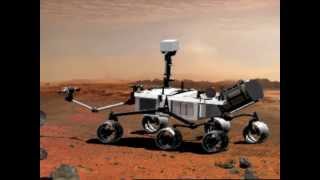