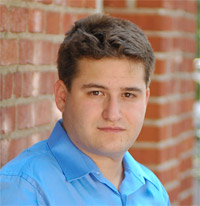 As an undergraduate, Michael co-founded two companies: Simulant, which sold the first commercial distributed FDTD code; and Luxtera, a venture-funded company working to commercialize silicon photonics. As a graduate student, he worked on developing integrated nonlinear optical devices using silicon photonics. He was the recipient of an NSF Graduate Research Fellowship and, as an undergraduate, of a merit-based fellowship from Caltech.

Michael recently joined the faculty at the University of Washington in Electrical Engineering, where he was the recipient of an Air Force Office of Sponsored Research Young Investigators Program award in 2007.

No news for Michael Hochberg today.