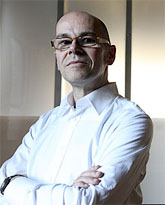 Robert Stone is a multi-award-winning, Oscar-nominated and Emmy-nominated documentary filmmaker. Born in England in 1958, he grew up in both Europe and America. After graduating with a degree in History from the University of Wisconsin/Madison, he moved to New York City in 1983 determined to pursue a career in filmmaking.

Robert gained considerable recognition for his first film, Radio Bikini (1987), which premiered at Sundance and was nominated for an Academy Award for Best Feature Documentary. Multitasking as a producer, director, writer, editor, and cameraman, he has over the last 25 years developed a steady international reputation with a range of unique and critically acclaimed feature documentaries about American history, pop culture, the mass media, and the environment. His best-known work includes Guerilla: The Taking of Patty Hearst (2004), which premiered at Sundance and went on to become one of the most highly acclaimed theatrical documentaries of the year. The was followed by the documentary feature Oswald's Ghost (2007), for which Robert earned his second Emmy nomination for Outstanding Achievement in Non-Fiction Filmmaking.

Earth Days premiered as the Closing Night Film at the 2009 Sundance Film Festival and was released theatrically by Zeitgeist Films to wide critical acclaim. Robert's most recent film, Pandora's Promise, premiered at the 2013 Sundance Film Festival and is slated for nationwide theatrical release beginning June 12. Robert continues to create personally crafted high-end documentary films from his home in upstate New York, where he lives with his wife and their two sons.